A Debacle for Marius in Numidia

We had another DBA 3.0 game, this time in 28mm using Old Glory figures and the DBA 24 framework for the game. The setting is a fictional invasion of Numidia on, or after 105BC. The forces are as follows:
Marian Romans (II/49)
Marius (CinC) & Roman Cavalry (Cv) x 4
Spanish Light Horse (LH) x 2
Asiatic Horse Archers (LH) x 4
Thracian Mercenaries (3Ax) x 2
Skirmishers (Ps) x 2
Legionaries (4Bd) x 10
Numidia (II/40)
Jugurtha (CinC) & Numidian Nobles (Cv) x 2
African War Elephants (El) x 2
Numidian Skirmishers (Ps) x 8
Numidian Light Horse (LH) x 10
Roman trained Numidian Imitation Legionaries (Bd) x 2
Both sides chose an element for their sub-general, per the DBA 24 guidelines.
The terrain for the battle was pre-set, and contained most of the wooded area you could ever find in Numidia, as well as difficult hills, all "bad going" according to the DBA rules. The difficult hills were outlined with chalk on the mat. 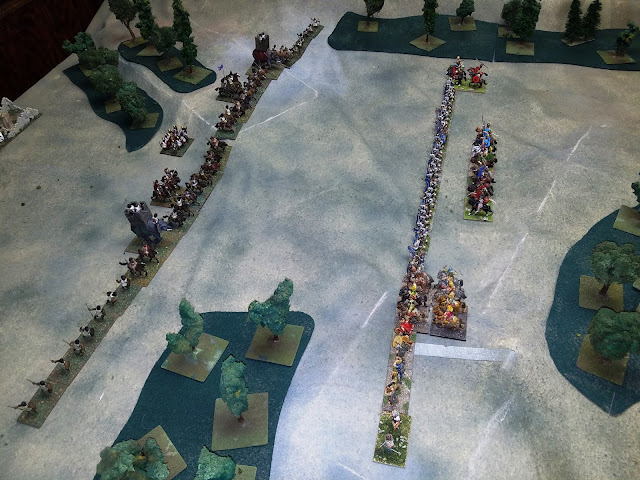 Above shows the deployment. The Numidians (on the left) were the defenders and chose their side and deployed first, the Romans (on the right) deployed second and moved first. The Romans thought they could take the woods to their front on the left with their Thracian auxilia and skirmisher units, supported by the Asiatic Light Horse to their right. However, this proved to be the error that cost the Romans the game, as we shall see. Note that the Asiatic Light Horse was deployed in part on the difficult hill, also an error. 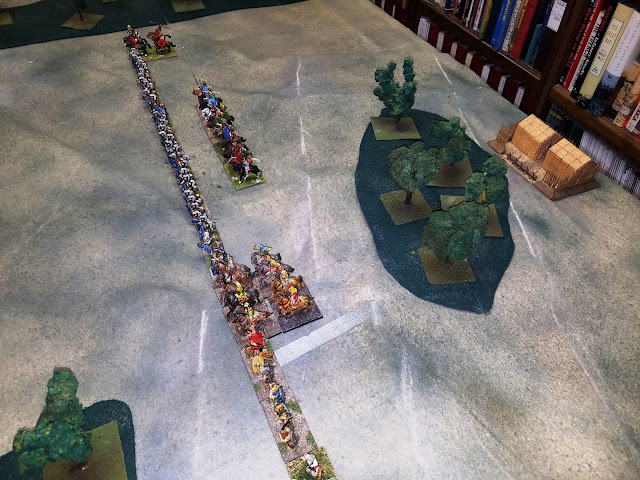 An overhead view of the Roman deployment & camp. 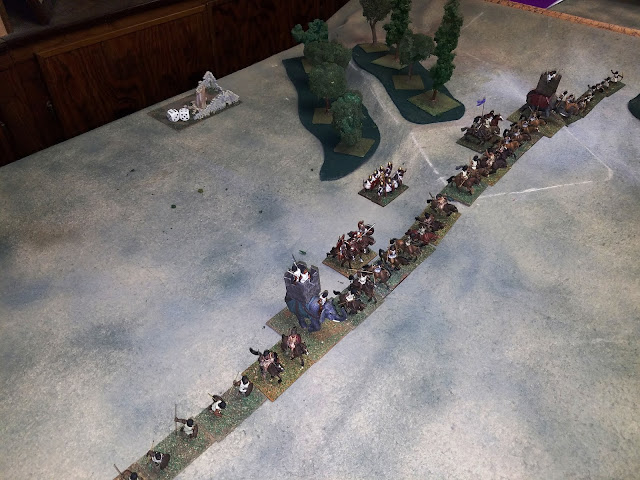 An overhead view of the Numidian deployment. Note some of the Numidian cavalry also deployed on the difficult hill (upper right). This also proved to be an error, but did not cost the Numidians (other than extra pips) during the course of the game. 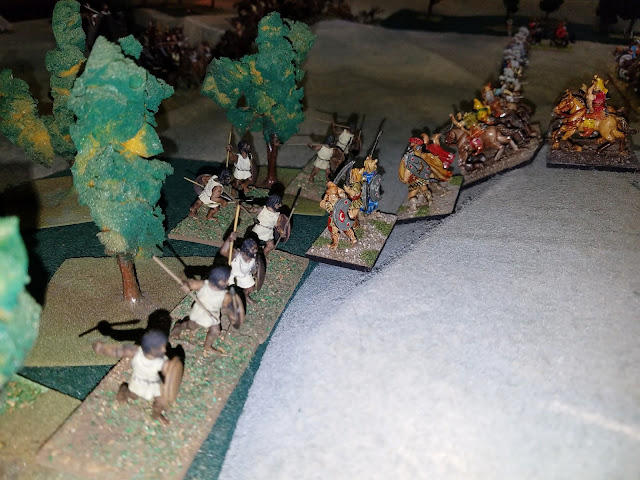 The above photo shows the Thracians had moved down the difficult hill into the woods, but were counterattacked by the Numidian skirmishers, who made a double or subsequent move into and through the woods on the first bound. Contacting the Roman light troops, the Numidians destroyed the Roman Psiloi unit. Note the Asiatic Light Horse in the background attempting to move away from the difficult hill at 1 BW per turn. 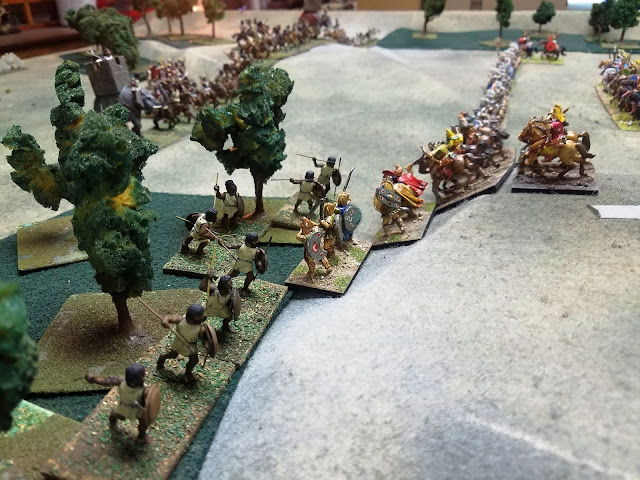 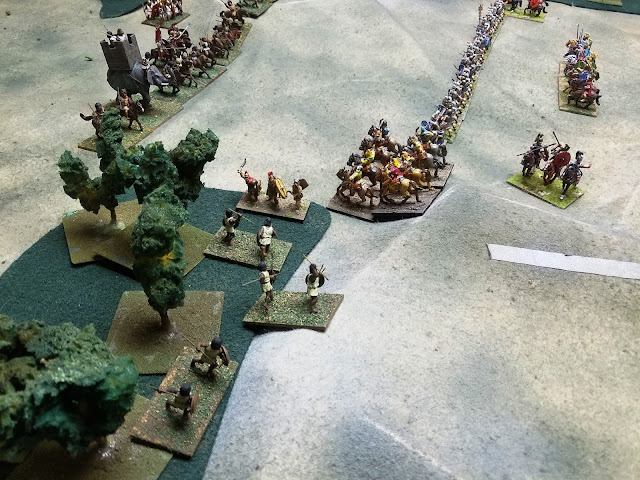 The Asiatic Light Horse finally get off the difficult hill. Another Thracian auxilia is destroyed by the Numidian skirmishers near the wood, the the remaining one tries to keep from being outflanked and destroys a Numidian skirmisher. Marius sends a Cavalry unit to support the left, careful to avoid the difficult terrain, which slows movement to 1 BW/turn and gives a -2 penalty in combat. 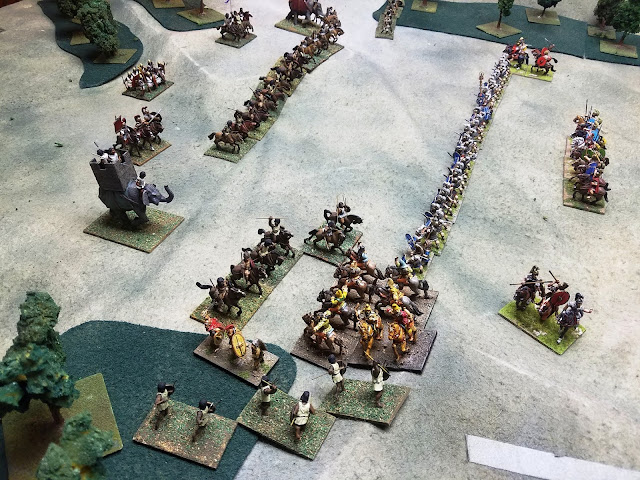 In the photo above, the Numidians are pressing their attack with their skirmishers in the near woods, also attacking the Asiatic light horse forcing it to turn and face. The Numidians have supported their force in the woods by bringing up 4 elements of Light Horse to face the Asians, along with the war elephant (behind). At the top of the photo, the Numidians are sending a force of 4 skirmishers into the far woods, and their line of cavalry is moving off the difficult hill in the center. 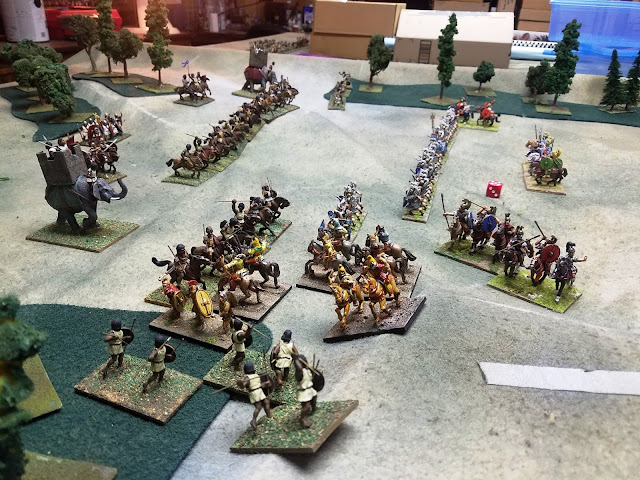 The Numidians continue pressing their attack out of the woods, as the Numidian Light Horse contacts the Asiatic Horse Archers next to the woods. Marius has send 2 Roman Legionary elements to support the Asians and another Roman cavalry element to the left. 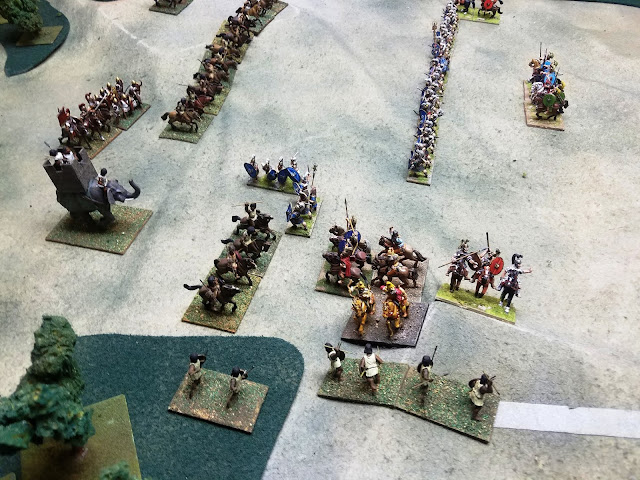 At this point, the fight on this flank is consuming most of the pips for both sides each turn as the adversaries try to gain the upper hand over the other. The Romans have now lost the remaining Thracian peltast unit and 2 Asiatic Light Horse units. The Numidians have lost one light horse element, while another has fled (off screen to the left). 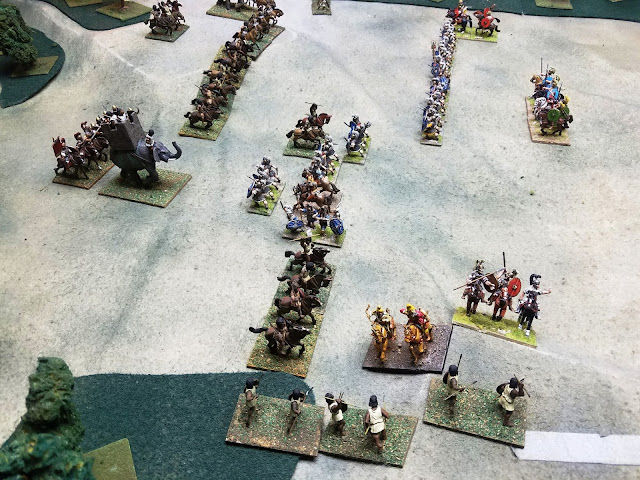 The Romans have fed more Legionaries into the center to face the approaching Numidian war elephant with cavalry support. Meanwhile the Numidians are positioning to surround the Asiatic Light Horse near the hill (lower right). 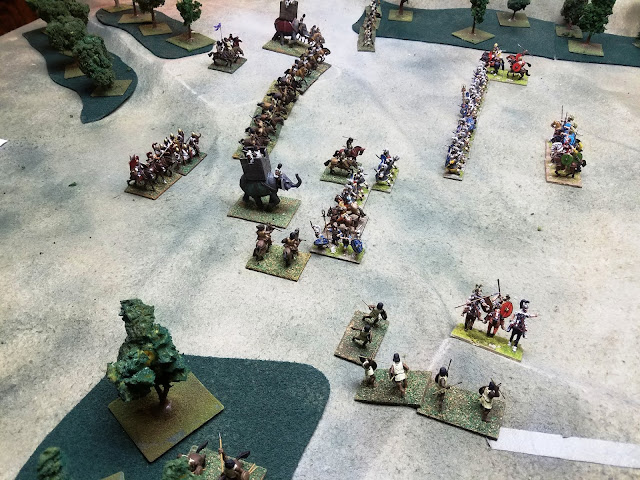 The battle finale: the Romans lose the Light Horse unit near the hill to Numidian skirmishers, and a Legionary element to the war elephant (center). The Roman casualty count is now 8 elements lost, and this ends the game.
The game was exciting and a learning experience, exposing the dangers of bad going to mounted and heavier infantry and it's ability to isolate a section of the battlefield. By advancing into the woods on the left flank, the Roman auxilia and psiloi were effectively isolated and difficult for the Romans to reinforce. A better strategy may have been for them to either deploy and defend on top of the difficult hill, where they would have had the elevation bonus, or kept in the open terrain to negate any advantage the Numidians had in bad going.