Recently we made a diversion from Ancients and played a 1942 Desert game using the Spearhead (SH) rules. For this game, we played a meeting engagement of about 450 pts using the points from the Spearhead Scenario Generation System. Our scenario was basically of both sides having 2 armored and one motorized infantry battalion, entering the board from opposite ends with the option of keeping one battalion in reserve. Victory would be based on defeating 2 of 3 enemy battalions. Regarding modifications to the standard SH rules, we used the following:

Below is the order of battle for both sides:

Both players made their plans & gave orders. An account of the game is below: 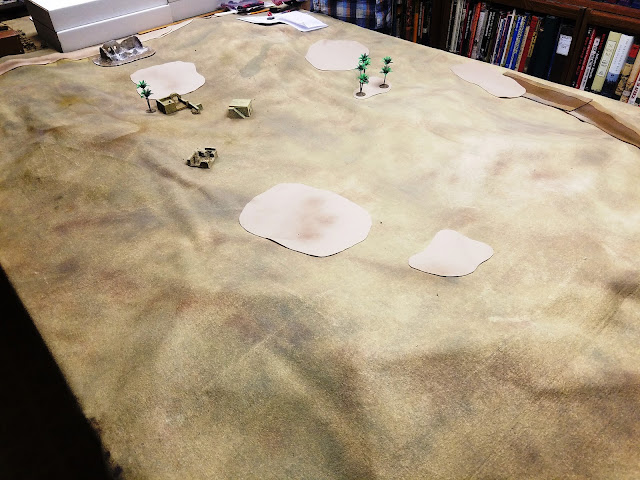 The battlefield. The buildings were treated as light cover. Lighter areas are sand (1/2 speed). 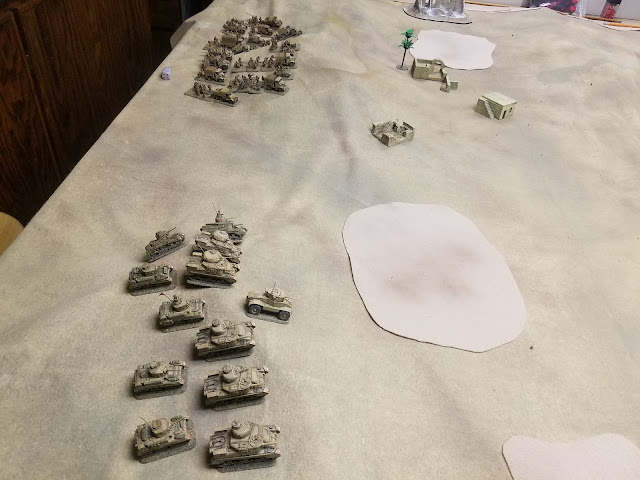 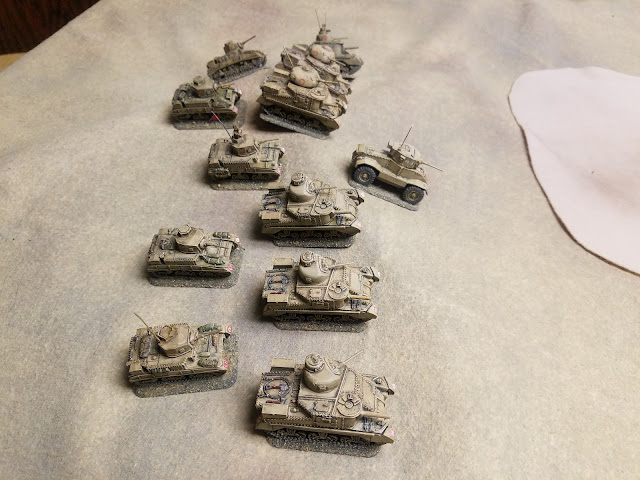 A close up of 7th Armored. 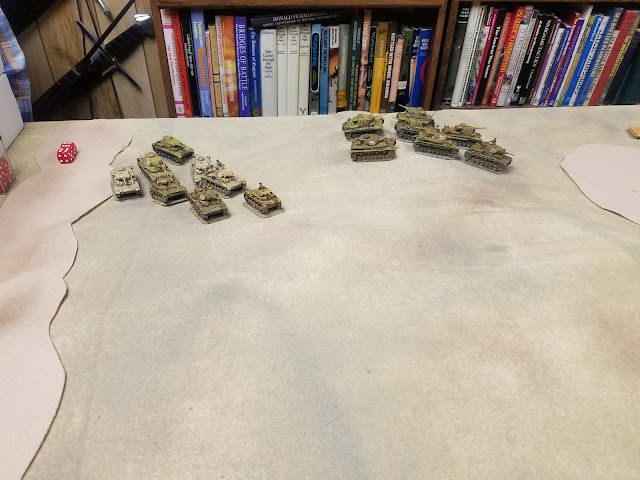 Both German Panzer Battalions enter the board. The Schutzen Battalion is in reserve. 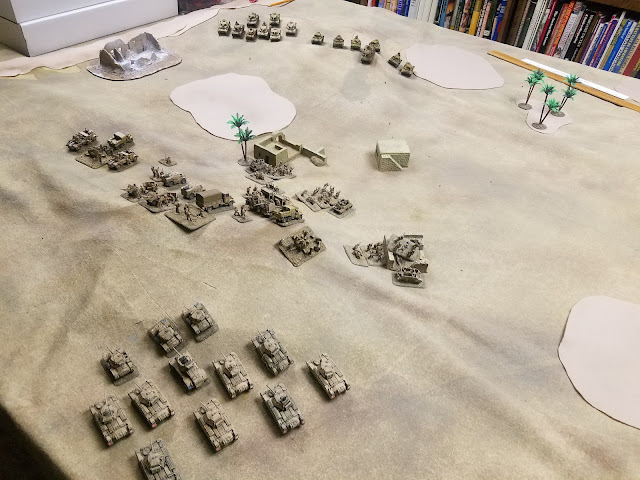 On turn 2, the 6th Armored Regt has appeared from reserve and shifting towards the left flank, while the Motor Infantry is approaching the oasis, leaving support platoons behind on the ridge. 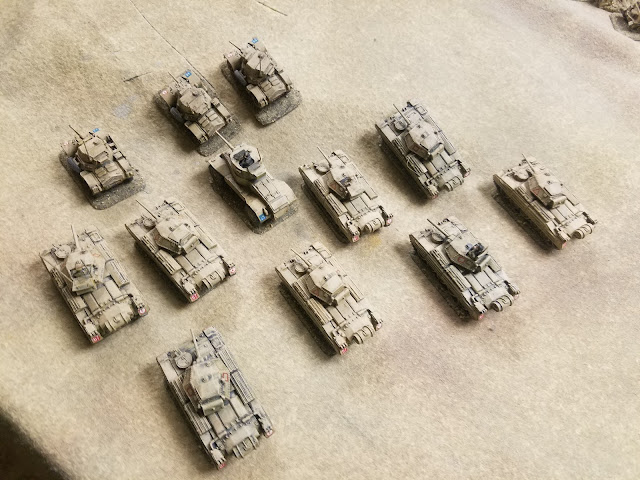 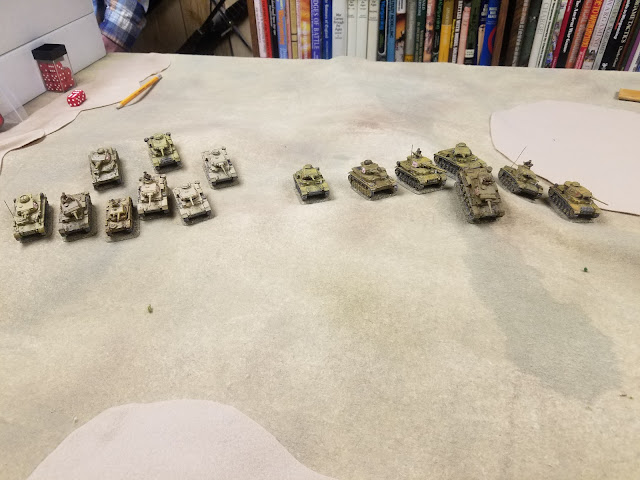 The Panzers spread out. 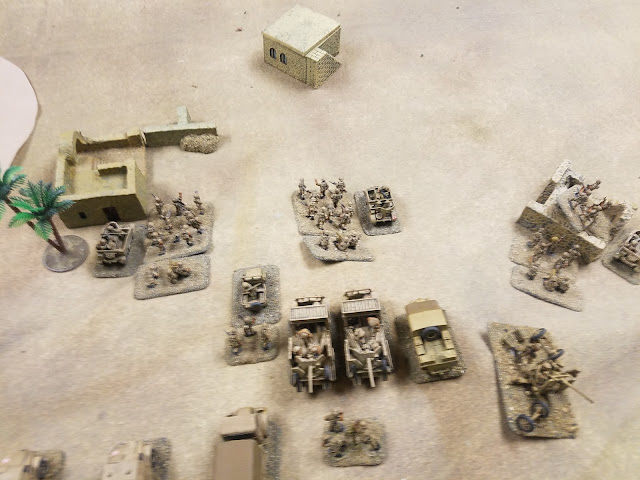 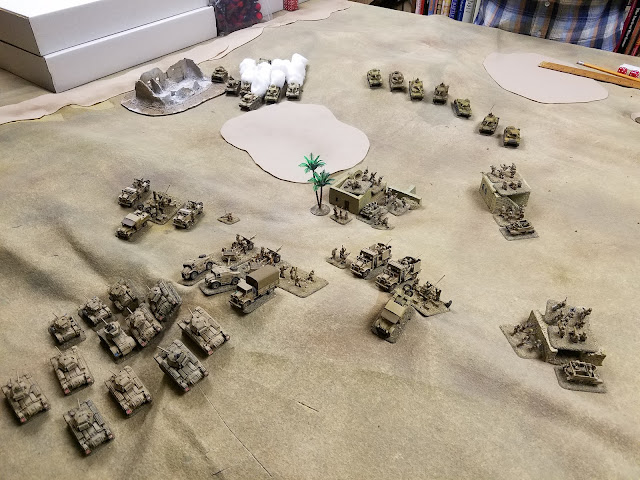 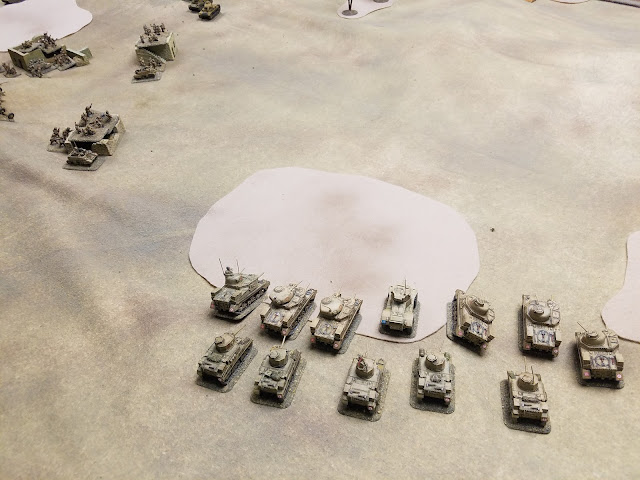 7th Armored has reached it's objective and is trying to change orders so it can advance further. 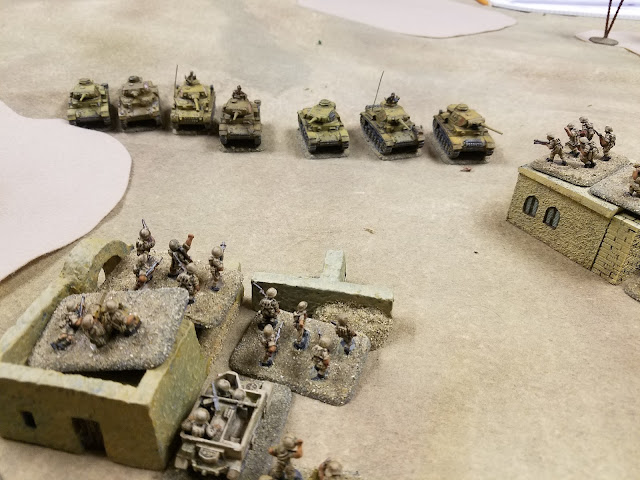 Panzer Battalion B advancing on the oasis. 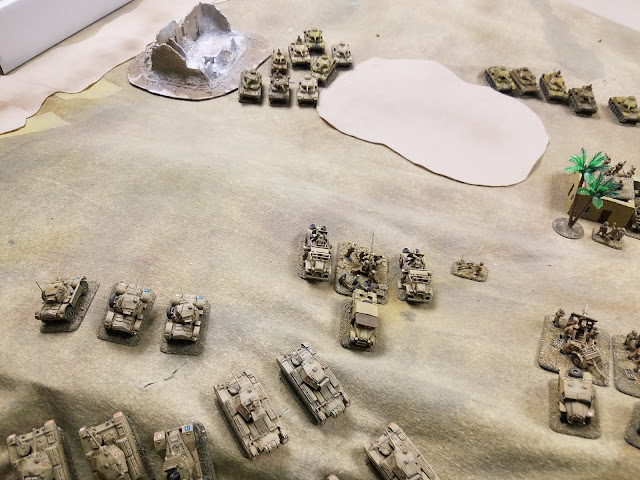 Panzer Battalion A advancing between some ruins (rough) and sand. Armored Regt 6 starting to deploy on the ridge, while a Bofors, 2pdr portees, and a 25pdr are deployed for action. 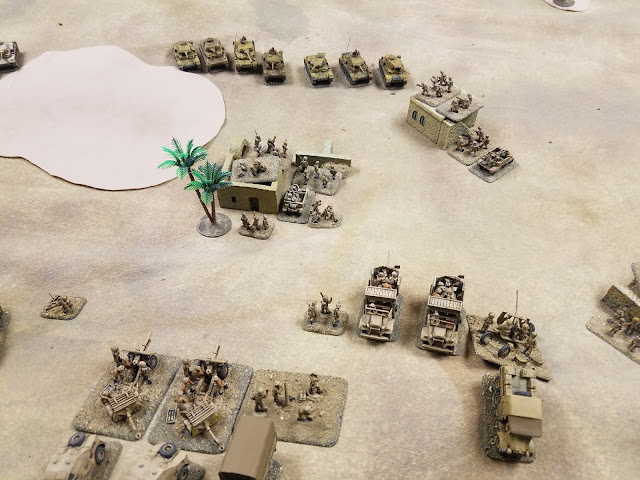 Panzer Battalion B starting it's attack on the oasis. 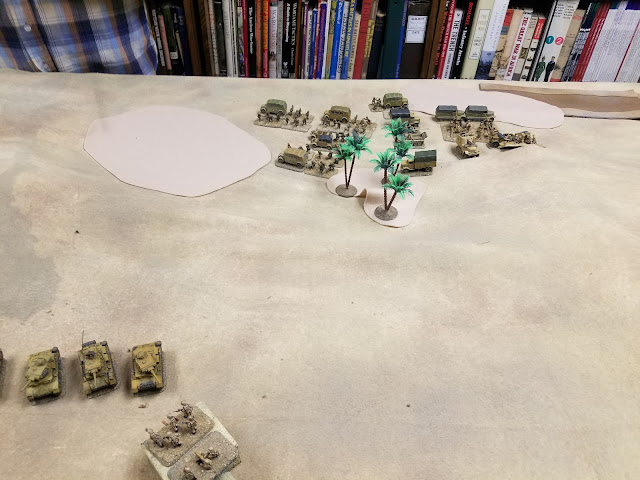 The Schutzen Battalion is activated from reserve and enters the board. 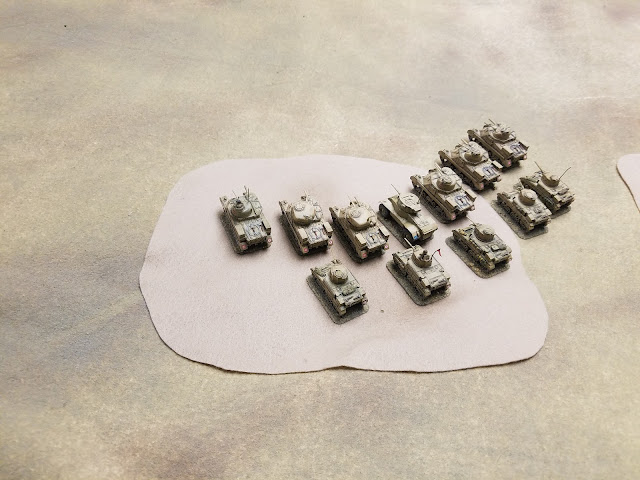 7th Armored is finally able to change orders and moves forward through the sand. 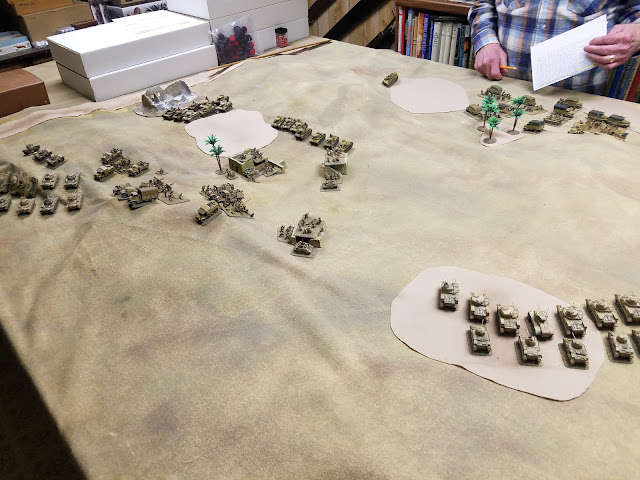 Overview of the battlefield. 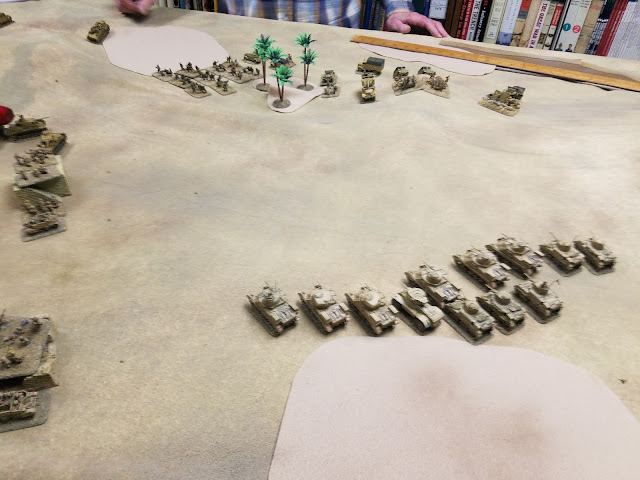 7th Armored clears the sand. Are they heading towards the German infantry or the flank of the Panzers? 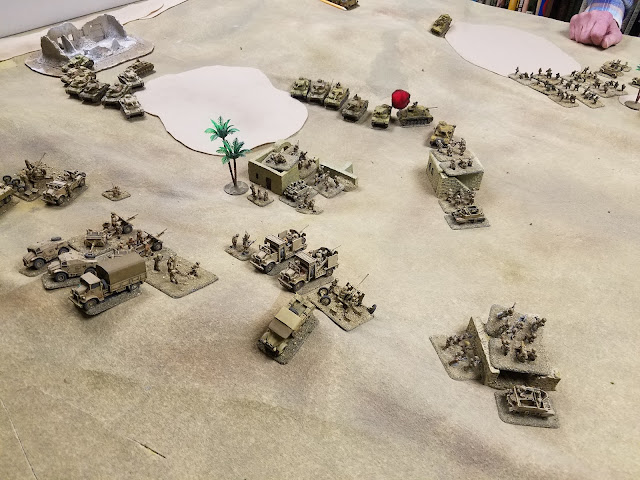 The Germans lose a tank platoon (the red puff marks a burning wreck). British in the building are firing AT weapons at the Panzers. 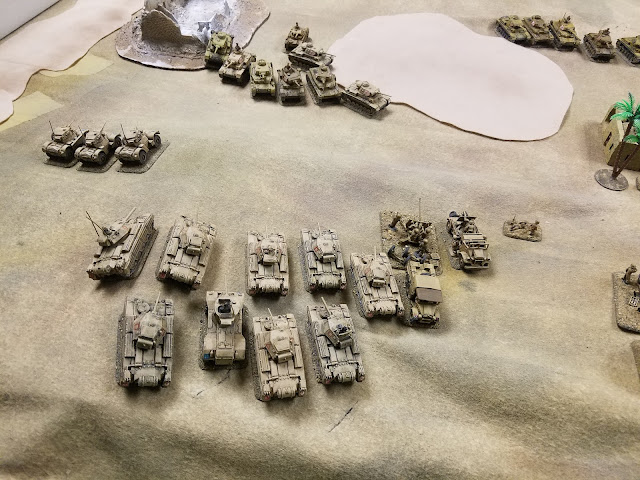 6th Armored is still deploying to engage the Germans below. 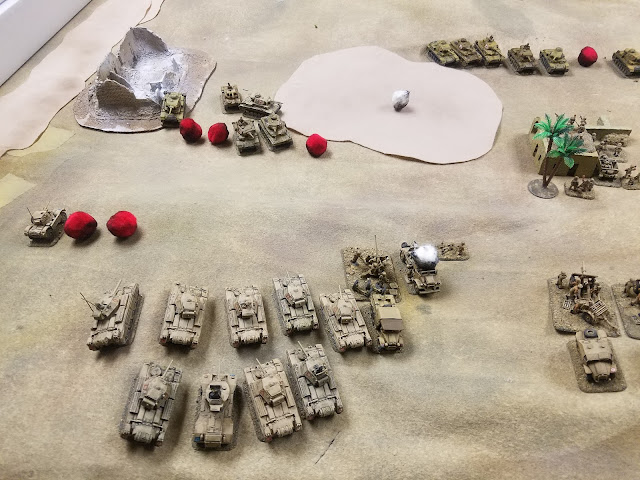 The British lose 2 A/C's, and a portee, but the Germans lose 3 Panzers due to a combination of indirect artillery, 2 pdr A/C, tank,& portees, plus Bofors fire. Another portee is suppressed (white & black puff). 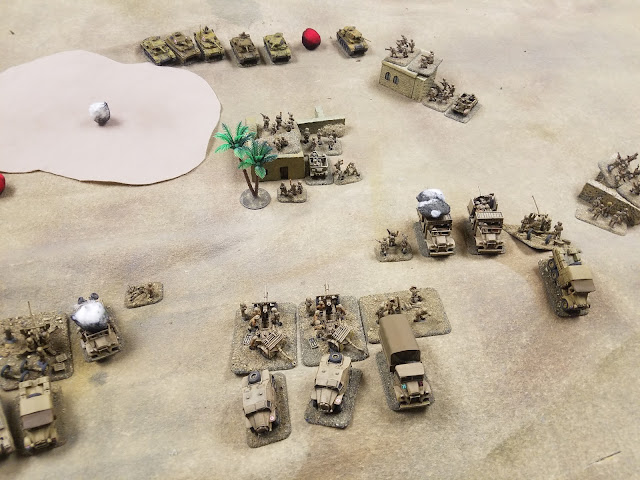 Another portee (6pdr) on the ridge is suppressed. 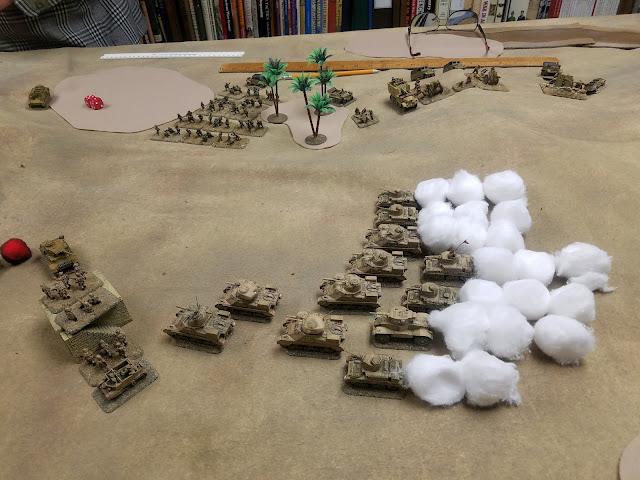 Due to orders they can't change, 7th Armored veers left towards the Panzers instead of the Schutzen, presenting their flank to the German gun line on the ridge. Moving at top speed to make dust, 7th Armored tries to obscure their tanks. 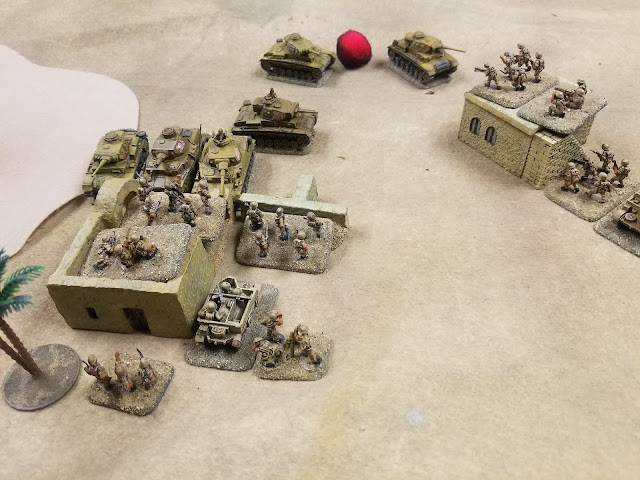 The Germans are pressing their attack to overrun the Motor infantry, who are only in light cover in the buildings. 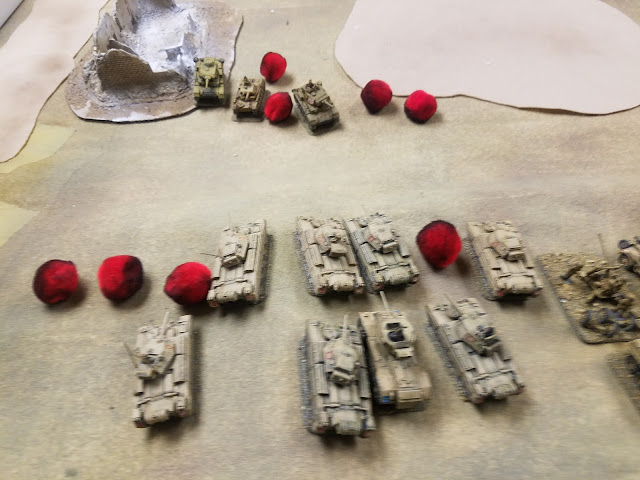 The Germans have lost another Panzer, while the Brits lose their remaining A/C and a Crusader. 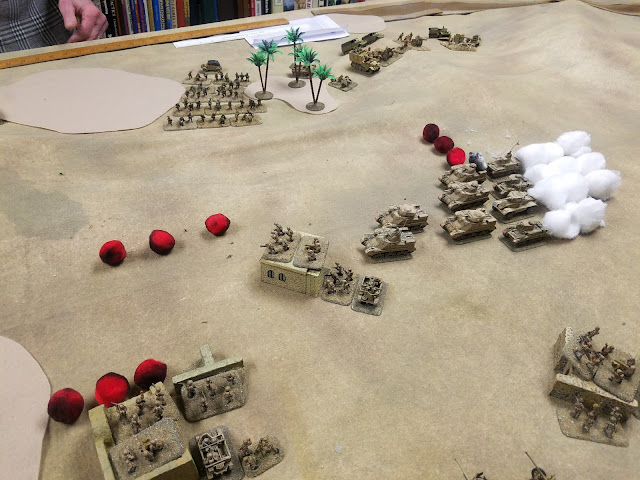 The fortunes of war definitely favored the Motor infantry, whose AT weapons destroyed 3 Panzers (three sixes in a row were rolled!). Panzer Battalion B is decimated and broken. Meanwhile, 7th Armored has lost 3 tank platoons and 1 suppressed due to 88mm, Diana, & PAK 38 fire from the opposite ridge. 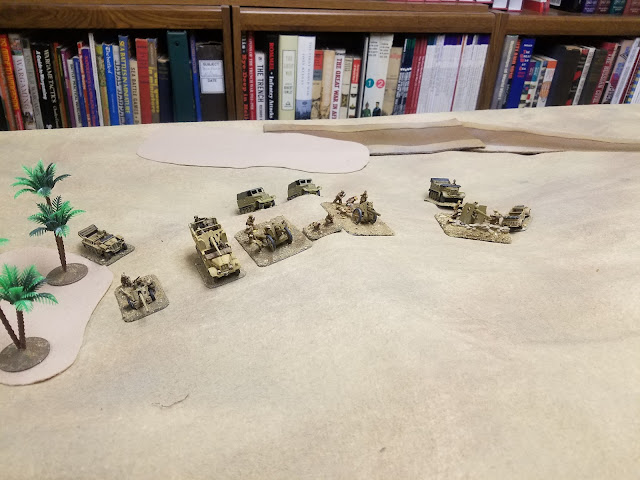 The German gun line on the opposite ridge. 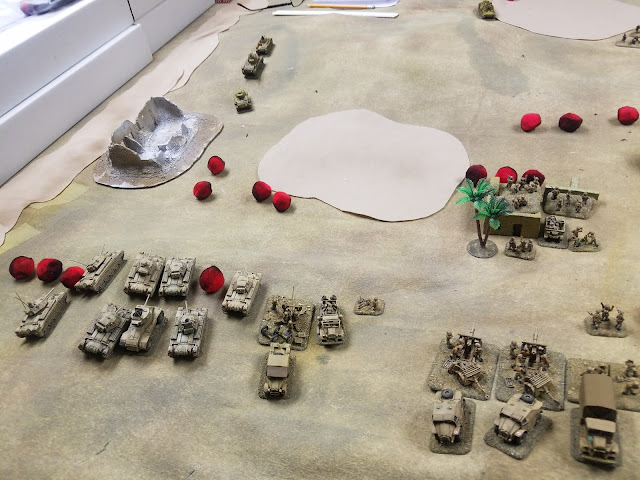 Panzer Battalion A has broken off, one platoon away from a morale check. The Germans have lost the engagement. 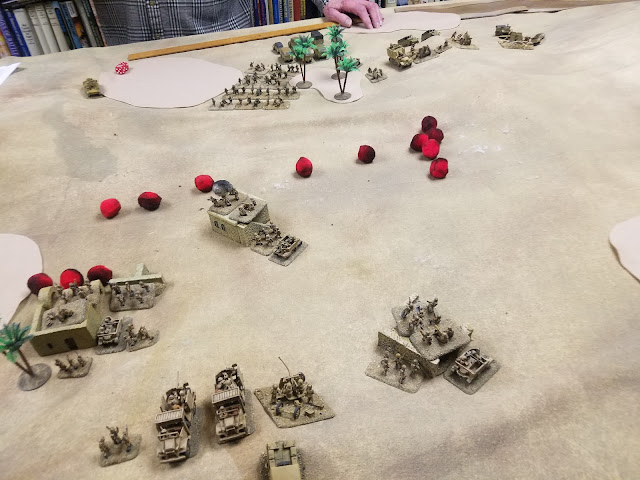 The battle proved costly for the British, as the German gun line destroys 4 more tanks of 7th Armored, who was unable to change orders and they fail their moral check.
Overall, it was good to play WW2 again after a long hiatus. Once the forces came into effective range, the action was fast & furious. The British infantry were lucky with their AT fire, it could have been much worse for them. The Spearhead rules are fun and orders are very important, as 7th Armored found out.
Battlefront Miniatures painted by and from the collection of Bob Pavlik.